skip to main | skip to sidebar

In the summer of 2015, while taking a break from creating bottle cap tapestries to focus on some dance and theater projects, I returned to a once daily habit of drawing, producing dozens of small artworks on paper filled with colorful abstract figures.

After filling an entire sketchbook, I began experimenting with cutting similar drawings out and creating small hanging paper sculptures. I found these pieces could be drastically altered by lighting and therefore difficult to truly capture. Here is one of my first such creations, back lit by natural light on the left and front lit by artificial light on the right:

Next I began to explore motion possibilities in order to fully take advantage of changing light and shadow angles. I used combinations of wire, thread, and fishing line to suspend elements, balancing them with various found objects such as bottle caps and small tree branches. Being very light weight, they are gently put into motion by cross breezes or persons moving nearby, and can be more steadily controlled by a strategically placed fan. To date, I have completed about one dozen structurally diverse mobiles and find them as difficult to document as dance pieces. This short video montage is an attempt to convey how I personally experience them. Musical accompaniment courtesy of my collaborators at Loopstock (aka composers John Bollinger and Jordan McLean). 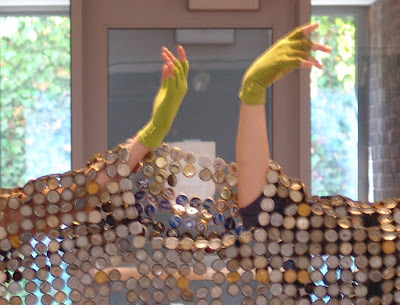 Williamsburg Walks scheduling change: RETTOCAMME is now performing Sunday, June 14th (all Saturday performance and action art cancelled due to inclement weather forecast). RETTOCAMME is now scheduled to be on the Triskelion Arts sod stage at North 10th from 2:35 - 3 pm. and doing intermittent roaming performances along Bedford from 1-4 pm. 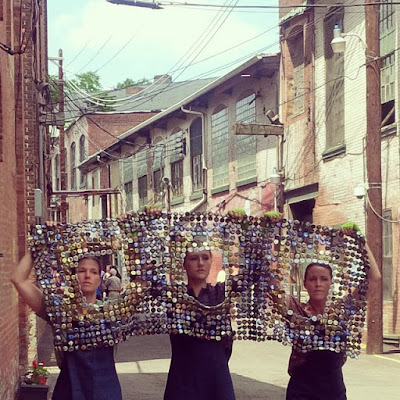 Last weekend, RETTOCAMME returned to the GARNER Arts Festival for the third time (previous appearances in 2010 and 2011) at the invitation of curator Jonathan Shorr.

On both days of the festival RETTOCAMME presented "a green flash fades" for the first time. This piece, choreographed for three dancers and a bottle cap tapestry, is designed to adapt to a variety of indoor and outdoor locations. Structured improvisations allow for immediate reactions to changes of scenery or audience reactions/involvement that contrast with moments of simple, repetitive, dance phrase work performed in a series of revolving solos and duets.

The GARNER Arts Center is part of an historic 19th century textile mill and many of the exhibitions and installations at the festival this year specifically involved the use of textiles in both traditional and non-traditional forms. In their performances at various locations around the site, the RETTOCAMME performers focused on imagery of women working in factories both past and present, i.e. pride in one's work, sisterly bonds in the workplace, desires/fantasies of an another life.

Upcoming performances of "a green flash fades" include: 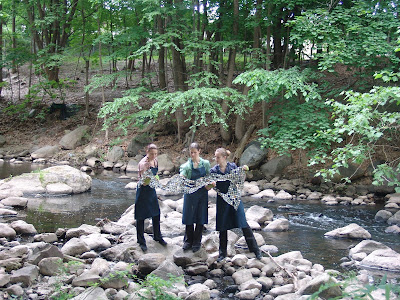 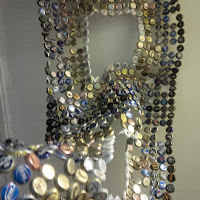 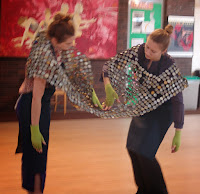 The festival is 11-6 on Sat. May 30 and Sun. May 31
RETTOCAMME performances will occur during 1-3 p.m.
both days at various indoor and outdoor locations.
Location updates will be made live via Twitter: @RETTOCAMME

Here are a few pics from RETTOCAMME's previous appearances at GARNER Arts Center:
(all photos by Michael Reck) 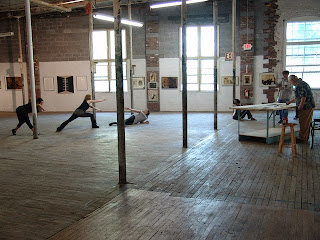 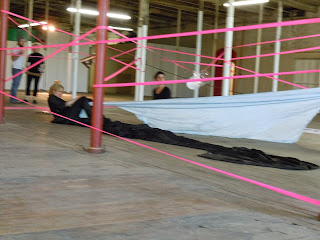 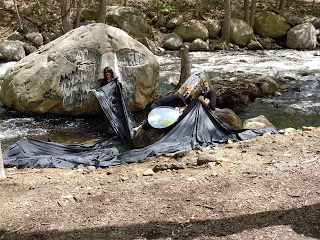 
GARNER Arts Center is located 35 miles from Manhattan in the lower Hudson Valley within the Garnerville Arts & Industrial Center, an historic 19th century textile mill.  GARNER provides unique and vibrant performance, gallery and creative space and presents artistic programs of exceptional merit for the benefit of a multi-cultural population.  It is our mission to preserve the sanctity of the original textile mill buildings and creekside landscape, while offering an inspired setting which honors individual expression.

Below is a link to Coach USA, which would be a straight shot from the Port Authority Bus terminal.  The name of the stop is Walnut Hill, which is a 5-10 minute walk to the GARNER Arts Center. However, if you ask the driver, they will often let you off at Railroad Avenue, and it is then a short walk up to the Arts Center.

this coming Monday:
South Brooklyn Shakespeare
will be having its first fundraising gala
at the Old Stone House in Park Slope, Brooklyn! 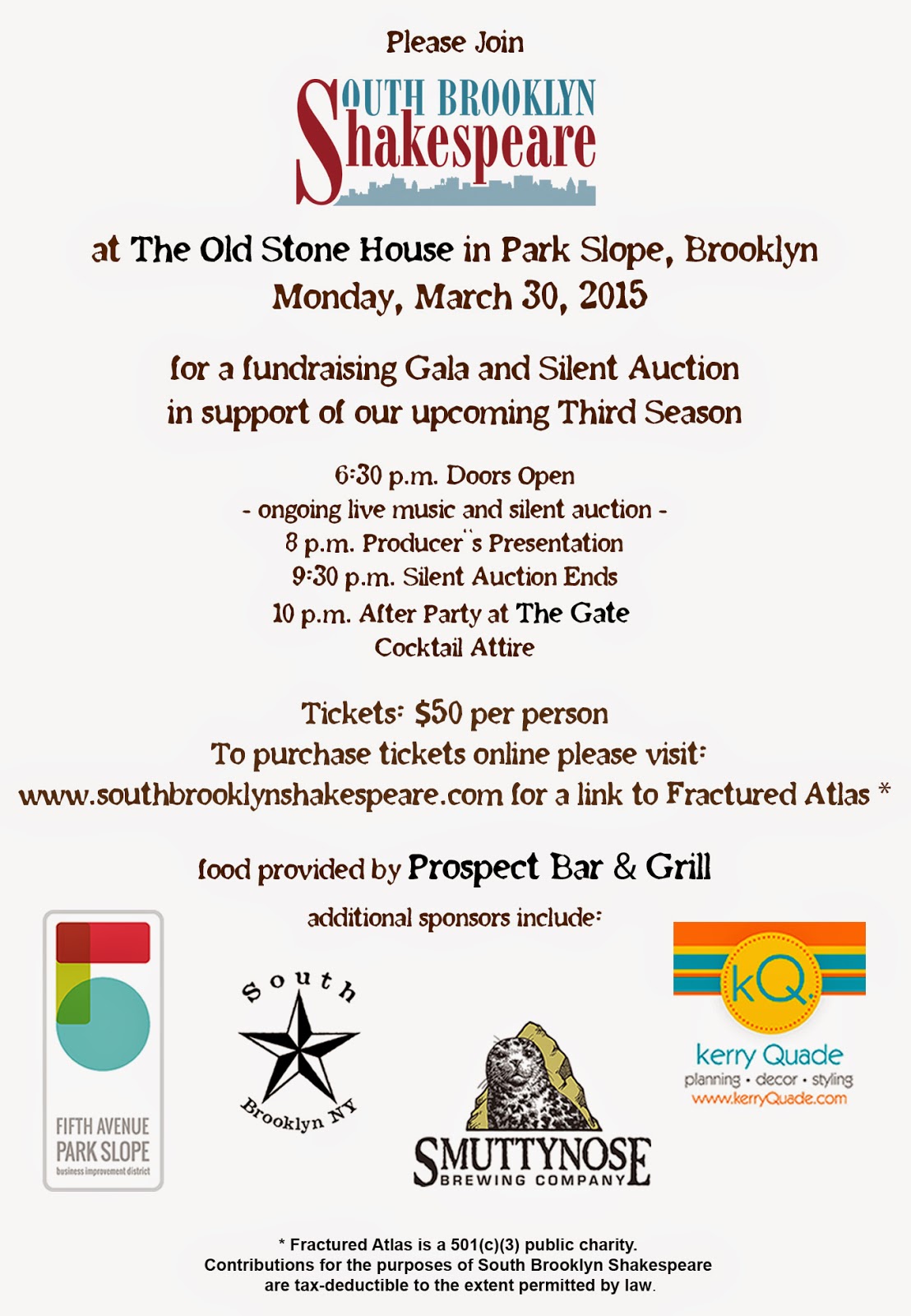 RETTOCAMME Inc contributed a limited edition of
fancy invitations which have already been distributed,
but tix can still be purchased on the web via Fractured Atlas! 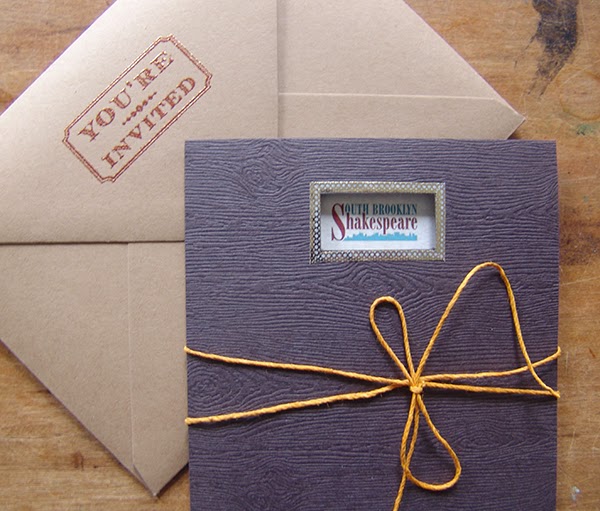 Please save the dates!